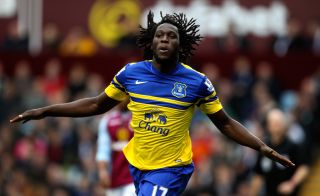 The 20-year-old, who is on loan from Chelsea, has scored seven goals in just six appearances since his deadline-day arrival on Merseyside.

And with Everton’s 2-0 victory over Aston Villa on Saturday taking them to sixth in the Premier League table, Distin is thrilled that his team have acquired a player with such natural talent.

"Considering Romelu's age he has got all the qualities," he told The Liverpool Echo.

"He's a monster. He's learning game after game and has the right mentality.

"I was talking about his size and his weight with him a week ago. We're more or less the same weight and to get there I had to work hard in the gym for four years.

"For him it's just how he is when he wakes up. I wasn't like that when I was 20. He's physically blessed and his positioning on the pitch and finishing are improving all the time.

"His attitude is great and that's the most important thing for a young player, and all our youngsters have that."

Lukaku has never scored for Chelsea since signing from Anderlecht in 2011, but netted 17 times in 35 league games when on loan at West Brom last term.