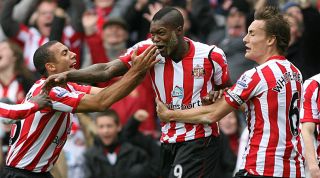 Djibril Cissé has hailed his “brilliant” affectionate working relationship with Roy Keane at Sunderland at the Stadium of Light – despite poor results suggesting otherwise.

Cissé spent the 2008/09 season on loan in the North East from Marseille, netting a debut winner against Tottenham at White Hart Lane which proved one of 10 league goals in a limp season for the Black Cats.

Sunderland finished 16th after coming home in 15th the previous campaign, with Keane stepping down in early December after a miserable run of five defeats in six. Despite that poor form, however, Cissé reflects positively of his time under the Irishman – even after a memorable dressing-down at half-time during one match.

Answering FourFourTwo readers’ questions in our August 2020 issue, out in shops and available to order online from July 22, Cissé explains: “Oh, I love the guy! Marseille had spent some money on new players by then, so when my agent contacted me and said Roy Keane would like me to join Sunderland on loan, I considered it. I wasn’t getting enough match time at Marseille, so I thought, ‘Why not?’

“Roy was brilliant. I was never nervous around him. We have a lot in common and both take football very seriously – I never forgot how important any club was. Roy was always very straight with me and got the best out of me.

“I remember one game: at half-time, we came in and I hadn’t played great; not that bad, but I hadn’t been myself. Roy walked in and went for me. Oh my god, he was screaming at me – really crazy, really loud. It took me back 15 years, when Guy Roux used to shout at me as a kid [at Auexerre].

“I realised what Roy was doing. Like Guy, he was trying to get me going. So, I lifted my head up and smiled. I smiled, knowing what he was doing. Well, Roy just got even angrier. ‘What the f**k are you smiling for?!’ he shouted.

“Anyway, after 10 minutes I scored and sprinted over to him on the touchline. ‘Well done, boss,’ I said. ‘I know exactly what you were doing!’ He looked at me like I was mad. But I did love the guy.”

Read the full You Ask The Questions interview with Djibril Cissé in the August 2020 issue of FourFourTwo – featuring an exclusive cover interview with Dennis Bergkamp, 25 years on from his arrival at Arsenal. We also remember more era-defining icons, hear the confessions of Nile Ranger, remember when Celtic halted Ranger’s charge for 10 in a row, chat to Bayern’s Joshua Kimmich, mourn Atalanta’s season of muted celebrations and much more. Grab your copy in shops or online!