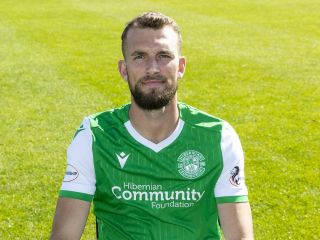 Christian Doidge scored a second-half hat-trick to send Hibernian into the last-16 of the Scottish Cup after Jack Ross’ side finally overcame Dundee United 4-2 in an engrossing replay.

United forward Lawrence Shankland, who was watched by a host of English clubs, struck first with a stunning strike before Scott Allan levelled from the penalty spot four minutes before the break.

Adrian Sporle equalised for the Championship leaders to cancel out Doidge’s first on the hour before the Hibernian striker went on to notch a further two unanswered goals to set up a fifth-round tie with Lowland League outfit BSC Glasgow.

In a lively start to the game the hosts went close to opening the scoring after only four minutes. Steven Whittaker forced his way into the box with a marauding run but his low left-footed shot struck the outside of Ben Siegrist’s post.

United soon settled into their rhythm and were keen to get bodies forward when they were in possession.
And it paid off after 11 minutes when Shankland found the net with a sublime strike.

The striker chested down Peter Pawlett’s pass just outside the box before fizzing a rising half-volley beyond the outstretched arm of Ofir Marciano.

Siegrist came to his side’s rescue in the 17th minute after Whittaker pounced on Mark Reynold’s slack pass before testing the shot-stopper.

Hibs then inexplicably left Shankland in space again in the 35th minute, but the striker fired a volley over from 10 yards from Pawlett’s corner.

And the visitors’ lead was cancelled out when Allan sent Siegrist the wrong way with a penalty.

Referee Kevin Clancy had no hesitation in pointing to the spot after Calum Butcher brought down Martin Boyle.

There was a compelling intensity to the second half, with both teams keen to find a second goal.

It came Hibs’ way on the hour mark when Doidge slotted home from close range following great work from Joe Newell to make space for a cross inside the area.

The home fans were still celebrating as Marciano pulled off a fine save seconds later. Louis Appere burst clear but his low drive was blocked by the Israeli.

United did level after 67 minutes, however. Liam Smith’s low pass into the area was hit first time by Sporle, who had only just come on, and the midfielder’s effort was deflected past Marciano.

There was no let up in the drama as Hibs took the lead for a third time. Newell whipped in a corner and Doidge’s header floated in via the underside of the bar.

Doidge added his third in injury time when he lashed in another Newell corner from close range to seal the win.