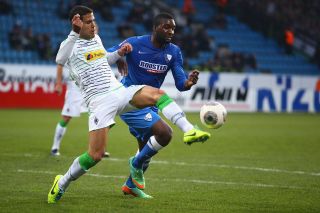 The central defender has missed three months with a shoulder injury but having played a part in two of Gladbach's friendlies during the Bundesliga's winter break, Dominguez believes he is fit enough to play against Bayern when the German league resumes on Friday.

Dominguez played an hour in Gladbach's 2-0 win over Bochum on Saturday and believes he showed enough to prove his fitness to head coach Lucien Favre.

"After being out for nearly three months, I feel really good," the 24-year-old Spaniard said.

"I've never been injured for that long, so I have to fight my way back (into the first-team setup).

"I'm back to full fitness and I'm settling back into the team, which is important."

Gladbach will begin the second half of the Bundesliga season in third position on 33 points, 11 behind league leaders Bayern.

Bayern were almost unstoppable in the first half of the season, winning 14 and drawing twice in their 16 matches, but Dominguez says Gladbach are 'ready' for the Bavarian club.

"Our team has worked hard at the training camps in Belek and Gladbach," the defender said.

"We're third after all and want to put up a real fight at home against Bayern. We've got good players and want to keep playing well."

The top three clubs at the end of the season will automatically qualify for the UEFA Champions League in 2014-15 and Dominguez has challenged his team-mates to ensure they remain at least third at the conclusion of the campaign.

"The second half of the season will be difficult," Dominguez said.

"The first half was hard but we managed to finish the year in third place. Now we want to stay third until the end of the (spring campaign)."