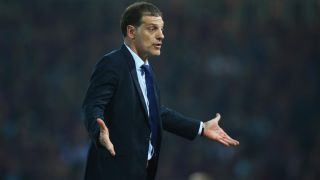 West Ham suffered a shock 2-1 defeat in the first leg of their Europa League third qualifying round tie against Domzale.

The Slovenian side secured a narrow advantage to take back to London thanks to two goals from midfielder Matic Crnic at Domzale Sports Park.

The 24-year-old opened the scoring with a penalty before West Ham captain Martin Noble equalised from the spot soon afterwards.

The home side won a penalty after just 10 minutes, when Havard Nordtveit was adjudged to have blocked a shot with his hand, and Crnic fired beyond Adrian's right hand from the spot.

West Ham had looked shaky from the outset but found themselves on level terms just six minutes later, Noble dispatched his own penalty with supreme confidence after goalkeeper Axel Maraval was penalised for barging into Winston Reid.

The half remained very open, with Marko Alvir turning a header off target for the hosts and Sofiane Feghouli causing persistent problems for Slaven Bilic's emboldened side.

But it was Domzale who took the lead early in the second half, as Crnic burst into the area unchallenged from the left before curling a fine low finish past Adrian, and they looked good value for their lead for the remainder.

Adrian made a terrific double save to deny Crnic and then Jan Repas in the closing minutes and keep West Ham's aggregate deficit to within a goal, but they still have plenty to do to turn the tie around in the return leg on August 4.