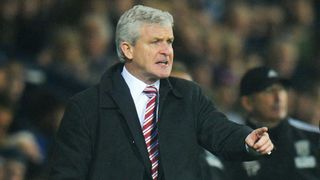 The Premier League side were defeated 1-0 by Liverpool in Tuesday's League Cup semi-final first leg at the Britannia Stadium, which is part of a busy programme of seven January fixtures.

Hughes will take the opportunity to make plenty of alterations when they travel to play League One Doncaster, giving a chance to fringe players who have been left frustrated with the manager sticking to a settled team in recent weeks.

"We will make changes – we need to make changes," Hughes told the club's official website.

"We have got another midweek game next week against Norwich, so it is important that guys who have taken most of the workload get a break and prepare for that.

"But I have got guys who are itching to be a part of what we are trying to do so they will have an opportunity at the weekend."

Goalkeeper Jack Butland is one of the players who may get a break, with 23-year-old Dane Jakob Haugaard primed to make his debut.

But whoever plays, the England international urged Stoke to make an immediate return to form after their disappointment against Jurgen Klopp's men.

Butland told the Stoke Sentinel: "After a loss you are always dying to get back on the pitch and put things right.

"It is another cup game and a chance to get back to winning ways and build momentum again.

"We do not want to be one of the shocks. We have had a great run in the Capital One Cup which we are looking to continue and we want to have a lot of games in the FA Cup.

"It is something we want to do well in, but we will head to Doncaster with a lot of respect for them. We have to put in a performance that is worthy of a win."

Doncaster, who beat Cambridge United in the previous round, are 11th in League One and come into the tie on good form after losing just twice from their last 12 matches in all competitions.

Meanwhile, Stoke have lost two on the bounce since their impressive back-to-back wins over Manchester United and Everton.

Stoke, like Doncaster, have never won the FA Cup, but were runners-up in 2011. Hughes is waiting for updates on the fitness of Stephen Ireland and Marc Muniesa (both hamstring) ahead of the game.