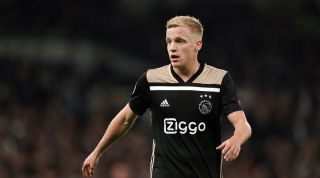 Tottenham are interested in signing Ajax midfielder Donny van de Beek, according to the Daily Mail.

Bundesliga giants Bayern Munich and Borussia Dortmund are keeping tabs on the Dutchman ahead of a potential summer move.

Christian Eriksen could depart north London for Real Madrid at the end of the campaign, and Mauricio Pochettino has identified Van de Beek as an ideal replacement.

The 22-year-old has scored 11 goals and provided 11 assists in the Eredivisie and Champions League as Ajax target success on both fronts.

The midfielder would cost Tottenham, who are also interested in Jack Grealish, Wilfried Zaha and Ryan Sessegnon, around £45m.

Following Saturday's 1-0 defeat by Bournemouth, Pochettino’s side must beat Everton next weekend to guarantee a top-four finish in the Premier League.