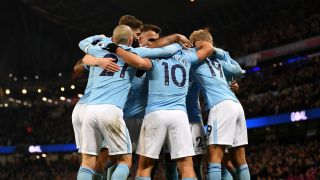 Pep Guardiola does not want Manchester City looking over their shoulders in the quest to become Premier League champions.

Following City's first top-flight defeat of the season at Liverpool last weekend, Manchester United's 1-0 win at Burnley on Saturday meant Guardiola's men went into the late kick-off against Newcastle United with their lead at the summit trimmed to nine points.

A Sergio Aguero hat-trick ensured it returned to double digits with 14 games remaining and Guardiola, a three-time league champion at both Barcelona and Bayern Munich, told his players to focus on the task at hand and not the fortunes of their rivals.

"I cannot deny we spoke about that. You have two choices – to see what happens behind or to see the 10 games we have to win [to become champions]," he told reporters.

"The best way is to maintain looking forwards. What happened [at Anfield] happened. I said to them that until fixture 24 we are the best team. But that doesn't count. It counts at fixture 38.

"To win 10 games will be tough because every team plays for something – to stay [in the Premier League], for the Europa League, for the Champions League.

"I said, 'don't look back, please. Don't look at our contenders behind; look what we have to achieve'.

"If you try and wait for what happens behind, if we are looking at what they do – that is not a good solution, in my experience.

"We won the game [against Newcastle], after you have Carabao Cup, FA Cup and then West Brom at home. That is the best way, to look forward and win games. After that we will be closer to being champions."

Guardiola made light of his players being spoken of as would-be "invincibles" one minute and possible chokers the next, before praising the quiet focus of a squad whose next assignment comes at Bristol City, defending a 2-1 advantage from the first leg of their EFL Cup semi-final.

"I read that Newcastle, years ago [in 1996], dropped a 12-point advantage and United won the league. Two months ago I listened and the Premier League is done," he observed.

"You lose one game… I said many times that is going to happen. In Anfield, you can lose. The important thing is the reaction.

"It is important to show the team is still there. I don't have the feeling we have given up.

"The team was so quiet in our meetings, quiet in the warm up and that feels like people are focused. That is so important."

Guardiola added: "I think they have the desire to keep going and going. There are a lot of games. It is important to see the personality of the team.

"With mistakes or no mistakes, that is part of football: the desire to try. Never I didn't see it this season and that is why I am pleased to be their manager."