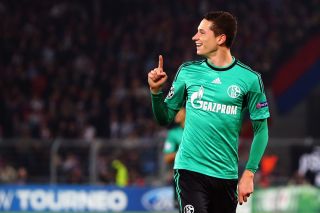 Draxler, a product of the Schalke youth system, has been linked with a host of top sides after impressing in the Bundesliga in recent seasons.

And while the 20-year-old insists that for now he remains loyal to his boyhood club, he has acknowledged that he is keen to one day fulfill his "dream" of playing for a bigger side.

When asked by Kolner Stadt-Anzeiger on his ideal destination, he admitted: "The big two in Spain, Real and Barcelona, Bayern (Munich) and a few others from England, namely Arsenal, Manchester United and Chelsea.

"I owe Schalke a lot, I have always been at Schalke. I need to emphasise this. But I'm not so rooted here that I could not tear myself away.

"I can honestly say that it is my dream to play for one of the big clubs at some point.

"You don't have to be playing for the very top clubs in Europe to draw attention to yourself, but if you want to achieve the great goals that the world-class players have, then one of them is playing at the biggest clubs in the world."

Draxler also spoke of his admiration for compatriot Mesut Ozil, who enjoyed spells in the Bundesliga with Schalke and Werder Bremen before moving to Real Madrid and then Arsenal.

"Just to be a team-mate of his (with the German national team) makes me quite proud."