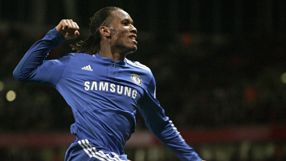 In an interview with the Italian website tuttomercatoweb.com, Bajo said Drogba had been in contact with both Serie A clubs over a potential transfer after only six months with Chinese club Shanghai Shenhua.

"I think there is a good chance that he might come to Italy now," Bajo said. "There is genuine interest from Juventus, AC Milan and Didier himself regarding the transfer.

"There has been contact with Milan and Juventus to understand the contract situation with the Chinese and we will have further contact and meetings with them both next week.

"He would love to compete in one of the world's best leagues like the Italian Serie A."

However Juventus coach Antonio Conte said on Saturday he knew nothing about a possible transfer by the 34-year-old Ivory Coast captain.

"I keep reading about Drogba but the club have never proposed him to me or vice versa," he said at Juve's pre-match news conference on Saturday ahead of their clash with Sampdoria.

"There are economic issues that need to be taken into account. Any transfers must be smart and low cost."

"I believe that signing Drogba isn't in line with what he has said," Allegri told a news conference.