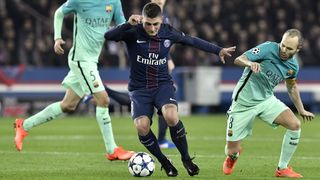 Former Barcelona attacker Christophe Dugarry has slammed the Catalans over their rumoured attempts to lure Marco Verratti away from Paris Saint-Germain.

Reports have surfaced that the Camp Nou side have earmarked Verratti as their main transfer target as they look to challenge for top honours again in 2017-18 after missing out on the Champions League and LaLiga this term.

Recent speculation suggests that Barcelona have asked Verratti to pressure PSG into selling him before tabling a formal bid and Dugarry is not impressed with his former club's tactics.

"What Barcelona are doing with Verratti is not right," Dugarry told RMC.

"It is not right not to make an official offer while Verratti is pressuring PSG.

"I think it would be good for the clubs to maintain a good relationship. If Barcelona want to take on PSG's Qatari owners, it will not end well for them. The Qatari owners are capable of paying 500 million for Lionel Messi if they want to. They could buy every Barcelona player they want.

"You need to have a certain respect for the club that took a risk on you. Verratti could lose it all, much more than PSG."

The 24-year-old midfielder has a contract at the Parc des Princes until 2021.