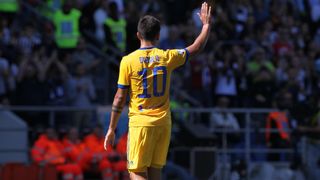 Paulo Dybala insists he should not be compared to Lionel Messi following his spectacular hat-trick for Juventus against Sassuolo.

The 23-year-old took his tally to eight goals in four Serie A games this season as he inspired the champions to a 3-1 win in Reggio Emilia on Sunday.

Dybala has often been likened to Messi and has even been linked with a move to Barcelona to join up with his compatriot with a view to becoming his long-term successor as the Catalans' number 10.

While he is not unhappy to be talked about alongside his Argentina team-mate, Dybala says he wants to forge his own legacy in football.

"I'm Dybala. It's not that I don't like the comparison, but he's a legend. He has done things that no one has ever done in the history of football.

"I don't want to be compared to anyone. You can send the messages but I want to have my own career and win my own trophies."

Juve's win takes them above Inter to the top of the table.