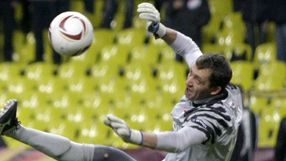 Spartak said Dykan had "broken multiple bones and suffered concussion" after being struck in the face by Zenit striker Alexander Kerzhakov's knee.

The 34-year-old decided to play on following the collision early in the second half but 10 minutes later he asked to be substituted.

"Andriy has been placed under the constant supervision of a neurosurgeon and neuropathologist. He is undergoing further tests to determine his condition," the club said on their website.

Dykan told local media that he would probably require surgery.

"I'm not feeling too bad at the moment. I still feel pain," he said. "It looks likely I will need surgery so it's difficult to say how long my rehabilitation would take.

"Doctors told me it would take at least a month for the bones in my jaw to heal."

Dykan's injury has deepened the goalkeeping crisis in the Ukraine squad following the two-year suspension handed to Shakhtar Donetsk's Olexandr Rybka for the use of a banned diuretic.

Ukraine, who co-host June's European Championships with Poland and face England, France and Sweden in Group D, may be forced to turn to Bohdan Shust and Andriy Pyatov given that Olexandr Shovkovskiy is their only fit and experienced keeper.