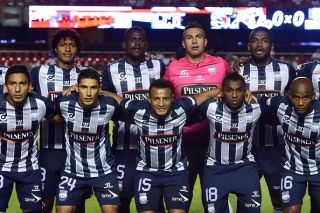 Argentine striker Emanuel Herrera made it four goals in two matches as Emelec defeated Manta 2-1 on Sunday, dragging the Guayaquil-based club into second in the Primera A table, just one point behind local rivals Barcelona, after former leaders Independiente slipped to third.

Barcelona edged out LDU Loja 1-0 on Saturday, while Independiente suffered a third loss in succession, slumping to a 1-0 defeat at home to El Nacional.

With two rounds remaining in the Primera A's second phase, Barcelona (42 points) will wrap up the title if they defeat eighth-placed Mushuc Runa on Wednesday and Emelec (41), Independiente and LDU Quito (both 40) all lose.

Emelec strengthened their hopes of claiming the title with their win over lowly Manta on Sunday with Herrera scoring his second brace in as many games.

The 27-year-old scored both goals for Emelec midweek as they accounted for LDU Loja 2-0 and he was again the hero at the Estadio Los Chirijos, hitting the back of the net in the sixth and 54th minutes.

Herrera opened the scoring from a quickly taken corner, pouncing after his first shot was blocked to stab the ball into the net, while his second strike was an audacious volley at the near post with his back to goal.

Manta got on the board in the 77th minute through Ricardo Lopez but the visitors were unable to produce an equaliser.

In the capital, LDU Quito gave up a two-goal lead but recovered to win 3-2 over Deportivo Quito, while in other results, Mushuc Runa drew 1-1 with Olmedo and Universidad Catolica defeated Deportivo Cuenca 2-1.