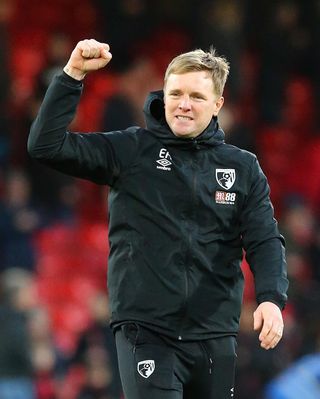 Manager Eddie Howe believes Bournemouth holding on to beat Aston Villa 2-1 with 10 men feels like a “big moment” in their season.

The Cherries moved out of the Premier League’s bottom three thanks to first-half goals from Philip Billing and Nathan Ake, though they were hanging on in the end after Jefferson Lerma’s red card.

Lerma walked early in the second half for two bookings and Villa made a game of it as Mbwana Samatta scored on his Premier League debut – becoming the first Tanzanian to do so in this division.

But Howe’s men leapfrogged their visitors in the table after seeing it out, claiming just their second win since mid-December.

“The pulse was off the radar for a spell, it has calmed down now, it is one of the many beauties of football, the emotions attached to a game,” Howe said.

“That is one that was going all over the place because I thought we played so well to the sending off, that is as good as we have played in a while.

“Then the game changes and we have to show a different side to our abilities and we just about did it.

“With that feeling and how the game had gone and the run of form we have been on, it just meant that it was hugely important we got over the line and win that game.

“We don’t know whether it will define our season but it feels like a big moment.

“We have shown we are still alive and kicking and we have points to prove.

“We have a long, long way to go before we can say we have done anything. There are some tough games to come, nothing is decided today.

“It’s just we are in there fighting and showing we want to be in the Premier League.”

Bournemouth were too hot for Villa to handle in the first half and after Billing swept home Dan Gosling’s knock down in the 37th minute, Ake’s fired home from close range on the stroke of half-time.

Lerma hit the crossbar early in the second half but in the 51st minute he was sent off for a second yellow card, both on Jack Grealish.

Samatta gave Villa a lifeline with a goal on his league debut with 20 minutes remaining but Villa could not force a leveller.

Villa are in a perilous position above the relegation zone, but boss Dean Smith does not see the result as decisive.

“People keep talking about six points, they have only got three points for today’s game,” he said.

“We believe in the group we have got. It’s just one game, we have a mini-break now and if we win when we come back we only get three points for that.

“There is a long way to go and to be honest, I didn’t watch their celebrations.”

Despite Lerma’s red card, Smith was not happy with some of referee Anthony Taylor’s decisions.

He added: “A few decisions cost us in the end. The second goal shouldn’t have stood because there should have been a free-kick on the edge of their box.

“There was a clear push on Ezri Konsa when he was in mid-air and they go the other end and get a free-kick and score from it.

“We could have had a penalty when Bjorn Engels gets punched in the face when he heads the ball over, but I don’t think VAR works for those ones.

“Any other area in the pitch and that is a foul.”