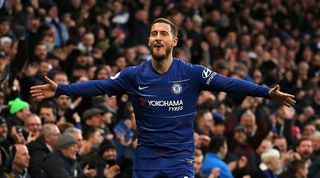 Eden Hazard may need to submit a formal transfer request to force through a move to Real Madrid, report AS.

The La Liga giants are still confident of landing one of their key targets, but have apparently grown concerned by Chelsea's obstinance in negotiations.

#Breaking Chelsea have lost their appeal to FIFA’s appeal committee against the ban on them signing players in the next two transfer windows, football’s world governing body has announced pic.twitter.com/lmOKb2uvNb— PA Dugout (@PAdugout) May 8, 2019

The Blues could lose Hazard for nothing when his contract expires in 2020, but that has not stopped them demanding a sizeable fee this summer.

Madrid have already failed with two separate bids, both of which have fallen significantly below the west Londoners' £100m asking price.

Hazard is thought to be reluctant to damage his relationship with Chelsea fans by requesting a move, but that could be his only option as he looks to seal a dream switch to the Santiago Bernabeu.

The former Lille man has enjoyed one of his best ever seasons in English football, scoring 16 goals and providing 15 assists in 36 Premier League appearances.

Andy Mitten column: At Manchester United, things are very bad - and could get worse