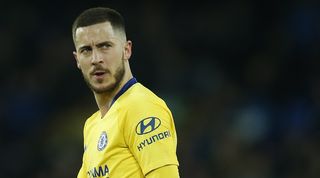 Chelsea forward Eden Hazard is on the verge of agreeing personal terms with Real Madrid, report The Independent.

Zinedine Zidane has made the Belgium international one of his leading transfer targets as he plots a squad overhaul at the Santiago Bernabeu.

Chelsea will be loath to lose their star man, particularly after their appeal against a two-window transfer ban was rejected by FIFA this week.

That ruling could make the Blues tougher negotiators this summer, but they are in a difficult position given that Hazard is out of contract in 2020.

The 28-year-old is desperate to seal a dream move to Madrid, who were heavily linked with the forward 12 months ago.

Hazard would cost los Blancos around £100m, but Zidane has been promised funds by club president Florentino Perez and is confident of getting the deal over the line.

Victory over Leicester on Sunday would secure a third-place finish for Chelsea in the Premier League.