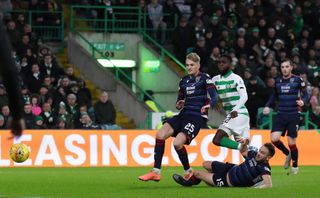 After both sides had passed up good opportunities to take the lead Hoops midfielder Callum McGregor converted a penalty in the 37th minute.

County were still in the game until French striker Edouard replaced Leigh Griffiths in the 63rd minute and made a remarkable impact, scoring twice in three minutes in deadly style to take Celtic five points clear of Rangers at the top of the Ladbrokes Premiership.

The victory puts pressure on the Light Blues, who have two games in hand and play Hearts at Tynecastle on Sunday.

There was nothing dynamic about the early stages, with Celtic in yet another formation.

Lennon had paired Griffiths and Edouard in the first two games of 2020 but the latter started on the bench, his chance to come later.

Moritz Bauer, James Forrest and Mikey Johnston returned while Staggies midfielder Don Cowie made his first appearance of the season after recovering from a knee injury.

After a rather stuttering start both sides made and missed good chances.

Then, in the 21st minute, Mullin was sent racing clear by midfielder Blair Spittal only to lob the ball over Forster but over the bar too.

Spittal then missed the target with a curling effort from 14 yards after being set up Mullin, who had robbed Hoops defender Jozo Simunovic.

Seconds later, Baxter somehow kept out a Forrest header from a Johnston cross then the visitors raced up the park and Cowie’s drive beat Forster and the far post.

The home fans were unimpressed but it was Celtic who got the breakthrough when referee Kevin Clancy – who had ignored two earlier penalty claims from the home team for handball – pointed to the spot when County defender Keith Watson challenged Johnston and McGregor assuredly drove the ball low into the corner of the net.

Griffiths just failed to get on the end of a Forrest cross seconds later but at last Celtic were up and running.

Staggies injured captain Marcus Fraser was replaced by Richard Foster two minutes after the restart and then Edouard came on for Griffiths and moments later, the 65th minute and with his first touch, he headed in a McGregor corner.

Three minutes later, when he eased past Watson and drove a pass from Forrest low past Baxter for number three and his 20th goal of the season, it was all over, the Frenchman again the hero of the stands.

Forrest was crowded out in the box just seconds later and prevented from grabbing a fourth which would have been somewhat cruel on County, not the first side to rue missing chances at Celtic Park.