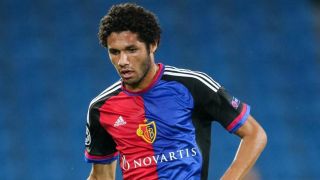 Mohamed Elneny is set to complete his move to Arsenal but he could be the club's only January arrival, according to manager Arsene Wenger.

Arsenal are poised to sign Elneny after Basel came out during the week and confirmed the Egyptian midfielder was close to departing the club.

However, the 23-year-old is likely to be Arsenal's sole piece of business in the transfer market after Wenger hinted as much following Saturday's 3-1 win over Sunderland in the FA Cup.

"I believe that the next step is to get [Tomas] Rosicky back, [Danny] Welbeck back, [Alexis] Sanchez back, [Jack] Wilshere back and maybe we will get one player in [Elneny]," Wenger said.

"Overall, I think we have no new injuries so I'm not worried. If we had the same number of injuries we would be a bit short."