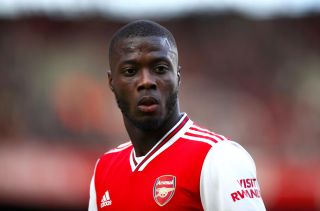 Unai Emery has revealed Fabinho was a target for Arsenal when he first took charge – and highlighted the Liverpool midfielder as an example of a top player needing time to adjust to life in the Premier League as club-record signing Nicolas Pepe continues to struggle.

The Gunners splashed out a fee in excess of £70million to recruit the Ivory Coast forward in the summer but he has yet to make the desired impact for the Gunners.

He has scored just once, a penalty in a 3-2 win over Aston Villa, and missed a fine chance to open the scoring as Arsenal slipped to a 1-0 loss at Sheffield United on Monday night.

Such inconsistent displays have seen people question the size of the fee paid to Lille to acquire the 24-year-old.

But Emery, who has insisted Pepe will need time to adapt ever since securing his signature and pointed to Liverpool midfielder Fabinho as proof.

“We spent money with Pepe, but Pepe needs time to adapt to the Premier League,” he said.

“For example, in France I loved a lot Fabinho. He was in Monaco and I wanted to sign him for Paris St Germain.

“When I arrived here, also his name was on the table to achieve to sign him, but he signed for Liverpool.

“The first six months he didn’t play, it was adaptation. But now he is amazing and I want the same with (Dani) Ceballos, with Pepe.

“We need patience, but Pepe is improving. On Monday, the key to win was with him. If he scores the first goal, it’s different.

“But it’s one process and I believe in him and I know we need time and patience. The supporters have patience, some more than others.”

Pepe is likely to sit out Thursday night’s Europa League Group F clash at home to Vitoria Guimaraes – but Emery could yet opt to include him in his side to give him another chance to impress and win over the early doubters.