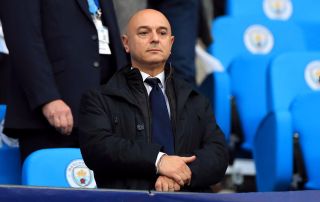 Tottenham’s run to the Champions League final has made Daniel Levy more emotional, according to Mauricio Pochettino.

The Spurs chairman is renowned in the game for his stern business acumen, fierce negotiating skills and dispassionate personal skills.

But seeing his club get to uncharted territory this season under Pochettino has allowed Levy to shed his frosty exterior.

He even surprised the players with a warming speech at the club’s training ground earlier this week ahead of the biggest game in their history against Liverpool in Madrid.

“The people and the players know him very well, and he was at the training ground, talking with the players and all of us,” Pochettino revealed.

“He said: ‘Thank you, we’re living a dream and it’s amazing all we’re achieving until today’.

“Some of the players said: ‘It’s amazing, Daniel is more human!’

“It’s a side he never showed too much. He was always more distant, trying to keep the emotion inside.

“Now, I don’t know why, but his improvement is like, ‘If the manager is crying, why can I not show more my emotion? It’s not so bad’.

“But sometimes people in business believe they cannot show that. He was like a little bit this type of person who cannot show his emotion.

“He was believing it was a show you are weak. Now he is believing on the opposite side.

“This transformation of the club, that we feel very well, he is a good example of how it is changing.

The ☀️ is out and we’re ready to work! #UCLfinal ⚪️ #COYSpic.twitter.com/ZoAKpTBA2X— Tottenham Hotspur (@SpursOfficial) May 30, 2019

“It’s not that he’s going to give us more money now – this area is not going to change, he’s going to be strong – but of course in the personal relationships he’s improving a lot from when we arrived here.”

Pochettino was also emotional this week after his assistant Jesus Perez surprised him by arranging a visit to the training ground from his hero Mario Kempes.

“It was an unbelievable thing,” the Argentinian said. “Jesus arranged the surprise, because Mario Kempes was my idol.

“To see him at the training ground was an amazing surprise. Beautiful. Wonderful.

“To have the possibility to meet for the first time Mario Kempes, who I watched win the World Cup when I was six years old in 1978, was another dream.

“I’m living another dream because to meet him was amazing. We were talking about his life now, in the USA, and the possibilities that football gives you to meet people, to know people and know different cultures, to travel.

“I was very surprised. It was Mario Kempes in front of me!”