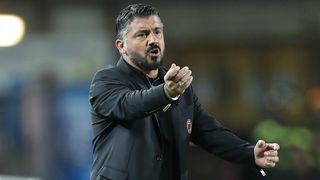 AC Milan squandered yet another lead as their Serie A winless run stretched to three matches in a 1-1 draw at promoted Empoli on Thursday.

The Rossoneri, lacking the services of the injured Gonzalo Higuain, had already given up five points from winning positions leading into this trip, a demoralising sequence that seemed set to end when Lucas Biglia rifled in a deflected opener in the 10th minute.

But the Argentina midfielder's desperate attempt to atone for Romagnoli's shocking pass from the back forced him into a foul on Caputo, who dusted himself off to deny Gennaro Gattuso's a maiden clean sheet.

Diego Laxalt earlier marked his first league start for Milan with a key part in the opener, delivering the cross from which Biglia emphatically punished Rade Krunic's lazy clearance - albeit with the aid of a deflection off Leonardo Capezzi.

The lead would have been fleeting had Gianluigi Donnarumma not produced a fine pair of saves, denying Antonino La Gumina in a one-on-one and then helping turn Caputo's shot against the near upright.

5 - AC Milan have fired five shots on target so far against Empoli, their best tally in the first half of a single Serie A game this season. Fire. September 27, 2018

Fewer concerns arose for Milan after half-time until Romagnoli's terrible error gifted Empoli a way back into the match.

The defender horribly scuffed a pass that ricocheted into Caputo's path and, brought down by a scrambling Biglia, the Empoli forward held his composure to blast in the subsequent spot-kick.

The impressive Pietro Terracciano later protected parity with two excellent stops from Suso that ensure Milan threw away another victory.