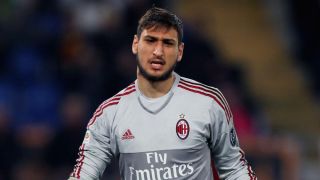 Gianluigi Donnarumma has admitted the prospect of his first senior competitive derby date with Inter is on his mind ahead of AC Milan's trip to Empoli this weekend.

Milan are due to face their fierce local rivals at San Siro on January 31, but - before the young goalkeeper can get his first taste of the Milan derby - he and his team-mates must first take on Empoli in Serie A and then tackle a Coppa Italia semi-final first leg visit to Alessandria on Tuesday.

Despite previewing next weekend’s occasion in his own mind, therefore, Donnarumma knows he must maintain his focus on the immediate task at hand.

"Next weekend will be my first derby, I cannot deny that I am thinking about it, but before then we have to focus on Empoli and then Alessandria in the cup," he told Milan's official website.

"This weekend's match with Empoli is very important both for consistency and our confidence. It won't be easy, there are no easy games in Italy, but we are going there to try and get a positive result because we're Milan."

Milan currently sit sixth in the league standings, eight points off the Champions League places and one ahead of Empoli, and they will be targeting a league double over their hosts, having won the corresponding fixture 2-1 in August.

Sinisa Mihajlovic's selection issues up front continue, as he searches for a prolific partner for in-form Carlos Bacca. M'Baye Niang has now gone six league games without a goal, Mario Balotelli is only just back to full fitness and Luiz Adriano is expected to be unavailable following the collapse of a transfer to China.

Empoli are sweating over the fitness of midfielder Riccardo Saponara, who is a doubt to face his former club due to the virus that kept him out of the 1-1 draw with Verona last weekend.

Defender Daniele Croce believes that result at Verona has set Empoli up nicely for the visit of Milan.

"The point of last Sunday is a good result, especially for the morale, we can be satisfied," he told Agenzia Impress.

"Against Milan last year we went to win [and] we played well but we were unlucky. They are a strong team but if we play as we know [we can], we can make it difficult."

- Empoli have won only two of their 21 Serie A matches against Milan (D6, L13).
- Empoli have lost only one of their last eight league games - against Inter - (W5, D2).
- No team has conceded more headed goals than Empoli in this Serie A season (nine), while only Juventus and Palermo (eight) have scored more headed goals than Milan (seven).
- Empoli have conceded only one goal in the last 15 minutes of games this season (a record in the top-flight this season).
- In the last seven appearances with Milan (all competitions), Carlos Bacca has mustered 13 shots, with 10 on target and five ending in a goal.