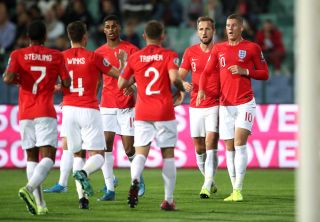 Gareth Southgate’s men stood firm in the face of sickening racism as England thrashed Bulgaria on a night of shame in Sofia.

The Three Lions took a giant stride towards Euro 2020 as they bounced back from Friday’s shock loss in the Czech Republic, yet this will match will be remembered for all the wrong reasons.

Few would have blamed Southgate’s side for walking off the field at the Vasil Levski National Stadium, where play was twice halted in the first half due to racism from home fans.

A stadium announcement in the 28th minute – the first step of the UEFA protocol explained to England’s players in depth at the start of the international break – warned fans that the Group A encounter may be abandoned if they did not immediately halt racist behaviour.

Tyrone Mings, making his senior debut, appeared to be subject of some of the abuse and it looked like the second step would be invoked just before half-time, only for play to resume after a brief break.

A group of Bulgarian fans left the ground and captain Ivelin Popov spoke to some other supporters during a half-time break few would have blamed England for refusing to return from.

The PA news agency understands that various officials met at half-time and decided that the teams would walk off if racism reared its head again in the second period.

Sterling and Kane struck as the match was completed, but all the post-match talk will be about Bulgaria and the need for a fierce, firm reaction from UEFA.