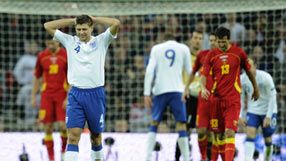 A misfiring Wayne Rooney, chance after chance squandered and a reception of frustrated boos at the final whistle – England went back to what they do best.

GEAR:Getthe England home shirt NOW with your favourite player's name on the back

Capello was under pressure to cast aside the flops and blood a new generation of players following the struggles in South Africa, but while changes were forced, the core remained the same.

Rio Ferdinand returned after a seven-game absence and took the armband off Steven Gerrard as Capello opted to return to his original choice of leader.

With in-form striker Darren Bent a late drop-out through injury, Rooney and Peter Crouch were reunited for the first time since those last desperate minutes against the USA and Algeria.

The absence of Montenegro’s captain and talisman Mirko Vucinic made a victory seem all-the-more probable for England.

The Roma forward failed a late fitness test, and the new central-defence partnership of Ferdinand and Manchester City’s Joleon Lescott no doubt breathed a sigh of relief.

Capello’s determination to continue with a rigid 4-4-2 formation was a source of frustration in the first half. Montenegro succeeded in closing down the space between midfield and attack sparking concern on the faces of players and supporters. Remember Bloemfontein?

Zlatko Kranjcar’s Montenegro are no mugs. They have now kept clean sheets in all four of their group games, and you could see why. But with a population smaller than Leeds, England supporters can be forgiven for expecting no less than a win.

England looked most threatening down the flanks, with wingers Adam Johnson and Ashley Young – both making their first competitive starts – attacking with pace and purpose and brimming with youthful exuberance.

Johnson came closest after 30 minutes with a vicious free-kick flashing just wide of the top corner. Crouch later produced a decent header, but like England, a little bit off target.

It was very much the same story in the second half. Johnson continued to produce the form the has shown for Manchester City, producing some descent crosses, but to no avail

England had a clear shout for a penalty on 78 minutes following a handball from left-back Milan Jovanovic that was missed by referee Manuel Grafe.

Minutes later, Jovanovic produced a venomous strike, smacking the woodwork, leaving Joe Hart well and truly beaten and reminding England that their nightcould have got even worse.

Gerrard yet again put in a captain-like performance, running the midfield. The same could not be said for Gareth Barry – a series of misplaced passes broke down spells of possession.

The final whistle was met by boos from the 70,000 England supporters, something Capello is growing all too familiar with.

England’s winning Wembley run has come to an anti-climatic end and the apparent formality of their qualification no longer seems a given.

A celebratory Montenegro go into the winter on top of Group G while England end a competitive year they would prefer to forget with a rather forgettable result.