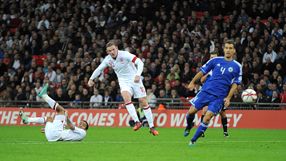 Poland coach Waldemar Fornalik is likely to be without captain Jakub Blaszczykowski, as well as first-choice goalkeeper Wojciech Szczesny, defender Lukasz Piszcek and midfielder Eugen Polanksi as they seek their first victory over England since their only success in 1973.

Roy Hodgson's new, youthful England, who went top of Group H on Friday with a 5-0 win over San Marino at Wembley, will be without Szczesny's Arsenal team-mate Theo Walcott, injured after five minutes against San Marino, but will have skipper Steven Gerrard eligible again after suspension and in line to win his 99th cap at Warsaw's National Stadium.

Ashley Cole could also win his 99th cap if he returns after missing the San Marino game while striker Jermain Defoe and defender Joleon Lescott could return after being rested on Friday.

Midfielder Frank Lampard, who has a calf injury, and defender Ryan Bertrand, who is unwell, would not be fit for Tuesday, the FA said on Sunday. Both missed the San Marino game.

Both teams have made unbeaten starts to their campaigns with England beating Moldova and San Marino by 5-0 scorelines and drawing 1-1 with Ukraine.

Poland's two matches have ended in a 2-2 draw with Montenegro and a 2-0 win over Moldova and they are level with Montenegro on four points, three behind England. Ukraine have two from two, Moldova one from three and San Marino none from two.

Poland warmed up for Tuesday's game with a 1-0 friendly win over South Africa in Warsaw on Friday with defender Marcin Komorowski scoring a late winner, and Fornalik, who took over as coach of the Euro 2012 co-hosts after the competition, was encouraged by the way his team played.

"We didn't play badly," he told Przeglad Sporotwy. "We showed we are a team. We created a lot of scoring chances, although it was too bad we only took one of them."

One of the reasons for that might have been because Fornalik left key striker Robert Lewandowski on the bench against South Africa, but he will almost certainly return to spearhead Poland's attack on Tuesday and try to add to his tally of 15 goals in his 48 appearances.

England, who were based in Poland during the Euros despite playing all their games in Ukraine, return to the country on something of a high following their efficient, if at times laboured, victory over San Marino.

Since Hodgson took control of England in May, his team are unbeaten, apart from a quarter-final penalty shootout defeat to Italy in the Euros, in 10 matches.

"There were a lot of positives to take from our win tonight," Hodgson said after Friday's game.

"We passed well, we created a lot of chances and eventually the goals came. Of course it will be a totally different kind of game in Warsaw but we go there in great shape.

"One thing for sure is that we now have a national team that can pass the ball and we now have a lot of pace. If we are looking to become one of the top teams in the world, it's important we continue down this route."

Among the pluses for England against San Marino was the performance of Wayne Rooney, who captain