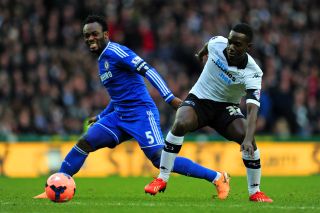 Ghana international Essien flew to Milan on Friday to undergo a medical ahead of a proposed switch from Stamford Bridge to San Siro.

Upon his arrival at Malpensa Airport, the 31-year-old expressed excitement at the opportunity to play for Clarence Seedorf, but also showed gratitude to Mourinho.

"I'm happy to be here. I will do my best for Milan and hope to be ready to play," Essien told Milan Channel.

"I spoke with Mr. Seedorf two days ago, I can't wait to be there.

"I would like to thank the president and the team and thanks to Mourinho that I was allowed to wear the Milan shirt."

Essien has made just nine appearances in all competitions for Chelsea this term and will now hope to play a more prominent role with Milan ahead of the FIFA World Cup in June.

The 31-year-old is set to become the first signing for new Milan coach Seedorf, who took over the 18-time Italian champions following the sacking of Massimiliano Allegri earlier this month.

Attacking midfielder Keisuke Honda and defender Adil Rami have also linked up with Milan in January, although both of those deals were agreed before Seedorf took charge.