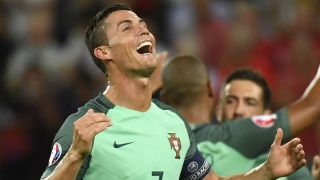 Cristiano Ronaldo has the chance to add another landmark achievement to a stellar career when Portugal face hosts France in the final of Euro 2016 on Sunday.

Of course, should Fernando Santos' team upset the odds at the Stade de France, their victory will come with the familiar, reductive comparisons.

Ronaldo would have a major international medal under lock and key in the aftermath of his great rival Lionel Messi retiring from Argentina duty without honours at the highest level - near misses at the 2014 World Cup and 2015 and 2016 editions of the Copa America taking their toll on the Barcelona icon.

Perhaps the Real Madrid superstar could then close his Ballon d'Or deficit in a career-long tussle with Messi to 5-4. The loyalists on each side of the divide - Portuguese and Argentine; Catalans and Madridistas will follow fierce argument with unbending counter-argument.

A strand to the Messi-Ronaldo discourse that unites the pair, at least until Sunday, is the lack of an international trophy. Without that, Pele and Diego Maradona will always hold the whip hand in those "greatest of all-time" discussions.

It is tempting to wonder whether the greats of the modern game are being judged by yardsticks from which football has deviated.

Pele and Maradona's considerable club achievements with Santos and Napoli, among others, should not be downplayed, but the World Cup was unquestionably the pinnacle for these two mercurial forwards. In a less connected, pre-multimedia world it was the only place to make a definitive statement.

A teen sensation who ignited the 1958 World Cup and contributed to defending the crown in 1962, Pele entered Mexico 1970 eager to extinguish the memory of failure in 1966 - one that dogged him for four years.

Any major player who fell short at Euro 2016 will simply hop aboard the Champions League's jamboree of shock and awe in a couple of months and begin to bolster their legend all over again.

There are plenty to choose from. Germany were undermined as Thomas Muller mislaid his scoring touch; Paul Pogba has flickered sporadically on France's route to the final; David Alaba appeared lost when he should have been leading Austria's best team for a generation; Belgium failed to match the sum off their all-star parts; Spain burned brightly and briefly before fizzling out; England… well, where to start?

The tournament top scorer and France's inspiration Antoine Griezmann stands apart at a competition major stars have failed to make their own, although coach Didier Deschamps left the forward on the bench before he came on to score against Albania - his first of six goals.

Deschamps conceded he felt the need to manage Griezmann's workload during the first nine days of the tournament on account of his gruelling schedule and near misses in the Champions League and La Liga with Atletico Madrid.

Imagining a similar situation for Maradona at Mexico 1986, where he played every minute and lifted the trophy after contributing five goals and five assists to the Argentina cause, is impossible.

Pele was infamously kicked to ineffectiveness at the 1966 World Cup. Now, the likes of Deschamps fear their prized assets arriving in a similar state, so arduous is the treadmill of elite European club football.

Euro 2016's over-achieving minnows in the form of Hungary, Northern Ireland, Iceland and Wales - the latter with one notable exception - do not count Champions League stars among their number or find any surprises in confrontations with more celebrated foes.

These well-drilled and tactically sharp teams boasted players chasing their defining moment. Pele and Maradona did the same in their day. Messi and Ronaldo can be found facing them on a seemingly weekly basis at the business end of the season.

"I have always dreamed of winning for Portugal, I hope it is our turn now," said Ronaldo, brimming with proud satisfaction after the semi-final win.

Should that dream be realised at the Stade de France, it will romantically garnish a wonderful career. If the dream dies, however, it should do little to diminish the place in the pantheon enjoyed by this modern great.