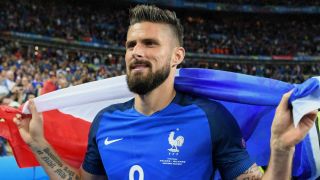 French Football Federation (FFF) president Noel Le Graet insists it is too early to call Euro 2016 a success for the national team.

France meet Germany in the second semi-final on Thursday after thumping Iceland 5-2 in the last eight over the weekend.

Portugal or Wales await the winner of that clash in the final, making the Marseille encounter a battle between the two current favourites to win the tournament.

But Le Graet believes it is too soon to assess the performance of Didier Deschamps' men.

"We are in the last four and we have an opportunity to go further," he told Le Parisien. "This is not the time to stop.

"The fact the host country is still in contention in the last week of the competition is important. For the players, for the finances of the federation and the general atmosphere surrounding the Euros."

Le Graet added that Deschamps would continue as coach regardless of Thursday's result and left the door open for Karim Benzema, who was left out of the France squad over his alleged involvement in a blackmail attempt against team-mate Mathieu Valbuena, to make a return.

"I do not like to get involved in personal attacks," he commented. "But he is not banned for life.

"A court will intervene soon and then advise."