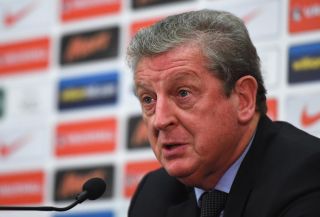 England surged to a 5-0 victory over San Marino at Wembley on Thursday and could arguably have won by an even greater margin against one of international football's weakest nations.

Indeed, the hosts saw a legitimate goal disallowed for offside when Adam Lallana deflected an Alex Oxlade-Chamberlain strike beyond the goalkeeper with the score at 3-0.

However, Hodgson has called for caution ahead of his side's trip to Tallinn, stressing Sunday's opponents could provide a step up in class.

"I would be a bit wary of putting Estonia in the same category as San Marino," he said. "They might surprise people who haven't seen a lot of them.

"They're very Scandinavian in their approach, and you know how good the Swedes, Norwegians and Danes have been in terms of work ethic and organisation.

"It will be a bit of a test, but I'm very confident we'll see it through."

Despite being only two fixtures into a 10-match qualifying campaign, England look unlikely to slip up having been handed a favourable draw.

Switzerland appeared to be their biggest rivals to top Group E. However, after losing at home to England in their opening fixture, the Swiss were on the wrong end of a 1-0 result in Slovenia on Thursday.

England would now need to experience a serious capitulation to miss out on one of the top two automatic qualifying berths, but victory in Estonia is by no means a given.

Magnus Pehrsson's side were 1-0 victors over Slovenia as they opened their campaign on home soil last month, although they did follow up that success with a defeat by the same scoreline in Lithuania.

Nevertheless, Estonia are ranked 127 places above San Marino and only missed out on a place at Euro 2012 following a play-off defeat to the Republic of Ireland.

Hodgson named a strong side to take on San Marino and is likely to select a similar XI in Estonia on Sunday.

England, who have won the two previous meetings between the sides 3-0, looked more threatening after Lallana and Oxlade-Chamberlain were introduced for the second half of Thursday's match, and the duo may have pushed themselves into contention for starting berths.

Estonia, meanwhile, will be without defender Ken Kallaste after he was sent off in Lithuania.