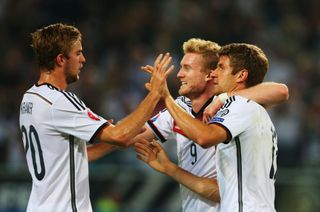 A 4-2 friendly defeat to Argentina on Wednesday raised questions in the Germany squad and, although Joachim Low's side were far from their best, a better display earned the hosts three points.

Muller headed Germany in front in the 18th minute of a first half they dominated, but the visitors greatly improved after the break and levelled through Ikechi Anya.

Scotland's joy lasted only four minutes, though, as Muller's scrappy second – scrambled in from five yards – was enough to defeat Gordon Strachan's plucky side, who saw Charlie Mulgrew sent off late on.

Bekim Balaj's superb volley claimed a shock 1-0 win for Albania in Portugal, with the home fans greeting the full-time whistle with intense jeers.

Gianni De Biasi's side were billed as huge underdogs against a team expected to cruise through Group I, but they left Aveiro with all three points as Balaj stole the show on a memorable day for Albania.

Balaj's winner arrived in the 52nd minute as he belted Odise Roshi's delivery past Rui Patricio, consigning Portugal to an embarrassing defeat in the absence of talisman Cristiano Ronaldo.

Gibraltar received a cruel welcome to competitive football as they were hammered 7-0 at home by a rampant Poland in Group D.

Kamil Grosicki gave the visitors an 11th-minute lead with a deflected effort and, although the hosts managed to keep Poland at bay until the break, the floodgates opened in the second half.

Grosicki doubled his tally and Lukasz Szukala added one of his own, but Robert Lewandowski stole the show by scoring four in the second half to complete Poland's biggest ever non-friendly win.

Also in Group D, Aiden McGeady's double gave Republic of Ireland the points as they began with a 2-1 triumph in Georgia.

McGeady put the visitors ahead with a tidy 24th-minute goal before an audacious strike from Tornike Okriashvili restored parity.

Everton winger McGeady netted again, though, delivering an emphatic finish from the edge of the area to give Martin O'Neill his first competitive win as manager.

Northern Ireland produced a stunning late turnaround to beat hosts Hungary 2-1 in Group F thanks to goals from Niall McGinn and Kyle Lafferty.

Substitute Tamas Priskin put the hosts ahead with a 75th-minute header, but the away side fought back and equalised through McGinn in the 81st minute before Lafferty scrambled in the winner to end an eight-game winless run.

Denmark were also forced to come from behind as they beat visitors and Group I rivals Armenia, eventually claiming a 2-1 win after Henrikh Mkhitaryan opened the scoring just after half-time.

The Danes battled back in the second half, with Pierre-Emile Hojbjerg netting a powerful half-volley and Thomas Kahlenberg eventually completing the comeback with a close-range header.

Claudio Ranieri's first competitive match in charge of Greece ended in despair as 10-man Romania took all three points away from Piraeus, winning 1-0 thanks to a 10th-minute penalty from Ciprian Marica, who was later sent off for two bookable offences.

Finland also began their campaign as victors, comfortably winning 3-1 at the Faroe Islands after initially falling behind just before the break.