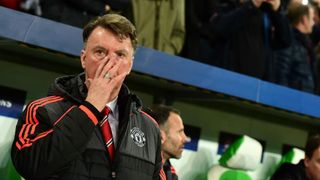 Former Manchester United stars Rio Ferdinand and Paul Scholes feel the pressure is growing on Louis van Gaal after his side's Champions League exit at the hands of Wolfsburg on Tuesday.

United threw away an early lead and conceded late on to lose 3-2 at the Volkswagen Arena with PSV coming from a goal down to win 2-1 against CSKA Moscow on an evening of high drama in Group B.

After United slipped from second to third, Ferdinand and Scholes were both critical of Van Gaal's United, especially given their lavish close-season spending.

"You look at the Champions League table and the teams there and you expect United to walk through and just put those sides to bed, especially at home," Ferdinand told BT Sport.

"When you consider the money spent - to go to the last game needing a result is disappointing.

"You can understand fans' frustrations and that pressure is beginning to rise on Van Gaal.

"It's embarrassing, I was in a squad that went in the Europa League, it’s an embarrassment.

"You don't want to come out of your house, you don't want to walk around Manchester, people looking at you and thinking you're not good enough, questioning you as an individual.

"This squad needs really looking at. There's no pace, no power, no leaders. Players are looking at each other rather than being the man."

Scholes added his frustrations at the attacking burden falling on opening goalscorer Anthony Martial amid the absence of injured captain Wayne Rooney.

"There was no urgency, no threat and no quality," the former midfielder added.

"United lust look like an average team and with an average team you are going to get average performances. You've got to say they've not bought as well as they could have done.

"When you're relying on a 19 or 20-year-old kid to score you goals it's not right. Proven goalscorers have left the club and that's where they've failed.

"I'm sure Martial will be brilliant, the only thing he lacks is killer instinct and maybe that'll come over time but United shouldn't be relying on him having spent all that money.

"It's going to be a long, difficult season. He's got to try get to the final of FA Cup. Last season, fourth was okay in a period of stabilising but now, fourth isn't good enough.

"It's more of a disaster when you're surprised but I'm not surprised. It's a team that have been poor all season in a shocking group. Will these teams [PSV and Wolfsburg] get to the quarter-finals? I think they'll get knocked out next round."