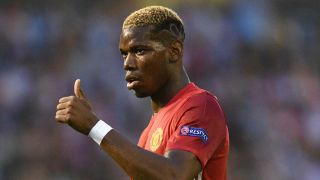 Paul Pogba was supposed to be the jewel in the crown of a glorious Manchester United renaissance when the Red Devils delved deep into their seemingly endless pit of reserves to bring the Frenchman back to Old Trafford.

Jose Mourinho arrived as the messiah following the turgid existence under Louis van Gaal. Henrikh Mkhitaryan the man with the guile to unlock defences. Eric Bailly a raw, powerhouse centre-back was a glimpse into the future. But above all was Pogba – the prodigal son was back to fulfil his destiny on the red side of Manchester.

Fast forward nine months and the harsh reality is in stark contrast to the glorious vision that was painted.

United have limped to a sixth-place finish in the Premier League and with, so far, only a League Cup victory to show for their vast outlays.

And it is little surprise that much of the burden for United's shortcomings have fallen on the shoulders of their marquee man Pogba.

The France international has been regularly beaten with the stick that comes with a world-record £89million fee, while the flamboyant dance moves on social media have brought ridicule and derision at a time when United continue to stagnate.

But it is unfair to pin the blame squarely at Pogba's expensive feet. He has been merely part of a collective underachievement at United, rather than the chief source.

United have not been clinical enough at home, 10 draws at Old Trafford and 15 in total out of 38 league games underpins why the gap to champions Chelsea was 24 points.

Pogba has been a victim of United's inability to kill teams off, and Mourinho is yet to find where he best fits into his favoured 4-2-3-1 formation.

But the argument Pogba has had little influence on games is one that does not hold a lot of substance when looking at the Opta facts.

This season he has created 57 chances for his team-mates, three more than in his final season at Juventus having played five games fewer.

The fact that Pogba only has four assists as opposed to 12 compared to last season sheds light more on United's lack of ruthlessness than it does on Pogba's own shortcomings.

Part of the damage for Pogba has been that while he and United have toiled, his previous employers have seemingly gone from strength to strength.

But it is flippant in the extreme to suggest that Juve are better placed without Pobga.

The Bianconeri were already the powerhouses of Italian football. Pogba had won four straight league titles and the past two Coppa Italias before returning to United.

That Juve have merely continued to dominate in Italy should be no surprise. The money they received from Pogba allowed them to reinvest in Gonzalo Higuain and Miralem Pjanic, while Dani Alves is one of the shrewdest free transfers in recent memory.

Throw into that a season in which Paulo Dybala has come of age as one of football's most devastating talents, and it should no surprise that Pogba's exit has not damaged Juve.

One area where the point does hold some merit is Juve's sublime run to the Champions League final, which included a masterclass of a quarter-final victory over Barcelona and the stifling of an exciting Monaco vintage in the last four.

It has only been two years since Juve were in the same position with Pogba in their team, though. On that occasion they ran into a Barca team at the height of their powers and were simply overawed as Lionel Messi, Neymar and Luis Suarez did what they had done all season and ran roughshod.

If Juve win the Champions League, and it remains a gargantuan if against a Real Madrid side that are probably the best team in Europe at the moment and celebrating a first LaLiga triumph since 2012, then the argument holds more weight.

But if Juve come up short again then it is hard to argue that Massimiliano Allegri's men are in a better position without Pogba.

Pogba will undoubtedly be frustrated that, as his former team-mates are gracing Europe's biggest and most lucrative game for the second time in three seasons, he is resigned to the lesser stage of the Europa League final.

For Pogba, though, there is no better time to prove a point than in Wednesday's crucial contest with Ajax.

Mourinho and United have thrown every last one of their proverbial eggs into the basket to secure Champions League football via winning the competition.

And it would be little surprise to see the moment mark the beginning of Pogba fulfilling his Old Trafford destiny.