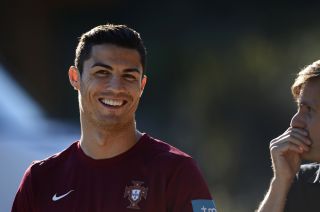 The Real Madrid forward overtook the legendary 71-year-old in the list of Portugal's leading goalscorers with a hat-trick against Northern Ireland in September.

But Eusebio told Portuguese television he was "saddened" by comparisons, claiming them to be unfair as he needed just 64 matches to reach his mark of 41 goals.

However, Ronaldo, who now has 43 goals in 106 internationals, sought to assure Eusebio of his status in Portuguese football history on Wednesday.

"I think it's not worth going that way (feeling sad), records are meant to be broken. We should not be sad," he said.

"I feel easy because Eusebio will always be Eusebio and Cristiano will be Cristiano. It's normal that people compare us but Eusebio should not be sad because he'll always be up there.

"What I want is to try and play 100 more games with Portugal because nobody will be sad this way."

Paulo Bento's side face Israel in Lisbon on Friday before taking on Luxembourg in Coimbra next Tuesday.