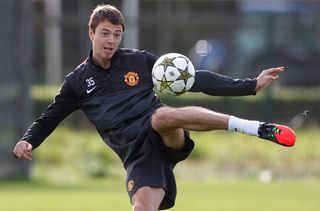 United face Chelsea, Liverpool and Manchester City within the space of 27 days - a fixture schedule that has frustrated boss David Moyes.

However, Evans is looking forward to the games and believes that the baptism of fire may prove beneficial in the long run.

"It might not be a bad thing to get straight into the tough games," he told the club's official website.

"We've been waiting all summer to get stuck back into it, so why not bring on the hard games straight away?"

United got their Premier League campaign under way with a 4-1 win over Swansea City on Saturday, after Moyes had described the opening fixtures as the "hardest start United have had for 20 years".

Evans believes positive results against Chelsea, Liverpool and Manchester City will set his side up well for the remainder of the season.

"In any competition you always want a good start and the Premier League is no different," he added.

"A winning start will obviously help you later on, but it’s more important how you finish the season."

United face Jose Mourinho's side on Monday at Old Trafford.