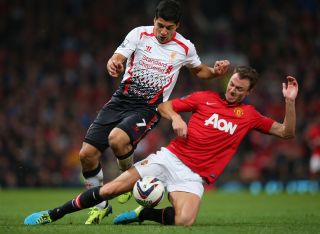 The defending champions made a poor start to the season by their own high standards, losing three out of six league games.

A run of four wins from five matches, though, has propelled United up the table and a 1-0 victory over leaders Arsenal on Sunday means David Moyes' men are fifth heading into the latest international break.

Momentum is slowly building under Moyes, who replaced Alex Ferguson in the close-season, and defender Evans has admitted United are focussed on closing the gap between themselves and the teams around them between now and the end of December after beating Arsenal at Old Trafford.

"The result was important, especially with Arsenal being top of the league," Evans told the club's official TV station.

"Apart from Liverpool, the other teams around us have slipped up, so it was big in terms of the points.

"It needed to be a good performance to beat Arsenal, and it was.

"We got off to a bad start (to 2013-14), but we talked about it, and we want to be within touching distance of top spot by the Christmas period.

"We know that we always finish the season well; we've got experience on our side and we've got history at this great club, so we're in a good position."