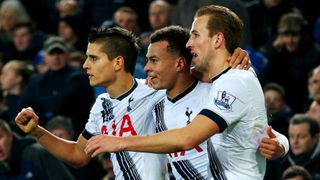 Mauricio Pochettino's side were the dominant force in the first half but were shocked when Aaron Lennon drilled home the opening goal with Everton's first effort of the game.

Spurs, who had twice hit the woodwork in the opening period, drew deservedly level through a fine Dele Alli finish - his fourth league goal of this season.

Roberto Martinez changed his side's shape with an hour gone in order to combat Tottenham's territorial dominance, though neither team looked ready to settle for a point as the contest became finely balanced.

Hugo Lloris made a brilliant save to deny Muhamed Besic as Everton finished strongly, but Spurs held out for the draw which moves them three points clear of fifth-placed Manchester United in the table.

Tottenham began on the front foot and Harry Kane had Tim Howard completely beaten but his drive from 20 yards out ran across the goalline and out of play after smacking the inside of the far post.

The visitors were in complete control but it was Everton who snatched the lead on 21 minutes with their first shot of the game. Romelu Lukaku nodded down Tom Cleverley's long pass and Lennon, arriving from the right, looped a fine half-volley past Lloris and into the far corner.

Ben Davies thumped an effort off the crossbar from 20 yards but Spurs did manage a breakthrough just before half-time as Alli expertly controlled Toby Alderweireld's long ball before rifling a first-time volley past the helpless Howard.

Tottenham fully deserved their equaliser after dominating most of the first half and they continued to enjoy the majority of possession early in the second, though a half-chance for Kane following Alli's clever chest down was all they could muster in attack.

The introduction of Besic and Gerard Deulofeu prompted a change in shape for Everton, which helped to wrest some control of the ball away from the visitors and created a more cagey affair as the game entered the closing quarter.

Alli stung the palms of Howard from 25 yards but Lloris was forced into a stunning save of his own as he tipped Besic's dipping effort over the crossbar, before Ramiro Funes Mori headed the resulting corner narrowly wide.

Everton looked the more likely to find a winner but Spurs held out for a deserved point to extend their good record against the Merseyside club.