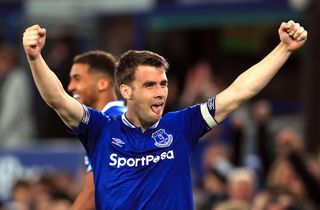 Everton kept their slim hopes of a top-seven finish in the Premier League alive as they recorded a fourth consecutive victory at Goodison Park by defeating Burnley.

The Toffees have seen off Chelsea, Arsenal and Manchester United on their patch recently – by an aggregate score of 7-0 – and two goals in three first-half minutes proved decisive against the Clarets.

Burnley defender Ben Mee got a telling final touch to Richarlison’s strike while Seamus Coleman headed in on the rebound as Everton ran out 2-0 winners in both sides’ penultimate fixture of the campaign.

FT | Job done in the space of three first-half minutes, it's another clean sheet and three points combo to wrap up our home campaign!— Everton (@Everton) May 3, 2019

The win moved Everton up to eighth and to within a single point of Wolves in seventh – a position which will seal a Europa League berth next season if Manchester City beat Watford in the FA Cup final later this month.

Wolves could extinguish Silva’s stated aim of European football with a win over already-relegated Fulham on Saturday but this was, nevertheless, an impressive way to sign off at home from Everton.

On a day where a statue was unveiled of the so-called ‘Holy Trinity’ of Howard Kendall, Alan Ball and Colin Harvey outside Goodison Park, Everton were immediately in the ascendancy, both in terms of possession and territory.

Their lightning-fast start did not translate to any clear-cut openings as Burnley soaked up the pressure.

However, just as it seemed the visitors had weathered the early onslaught, they fell behind in the 17th minute as their backtracking defence gave Richarlison an invitation to rifle beyond Tom Heaton.

The Brazilian’s left-foot strike from the edge of the area took a slight deflection off the unfortunate Mee, and Burnley’s luck worsened as Everton increased their lead moments later.

Lucas Digne’s rasping effort from a similar distance was parried back into the danger zone by Heaton, allowing Coleman, just onside, to stoop to head into an empty net.

Burnley would have been forgiven for allowing their minds to drift to the 5-1 hammering they suffered at Turf Moor in the sides’ only other meeting this season on Boxing Day.

But Everton’s second seemed to rouse Burnley, who thought they had pulled one back when Ashley Barnes expertly steered Robbie Brady’s ball into the area across Jordan Pickford, only for the assistant referee to flag for offside.

As the rain began to steadily fall, Ashley Westwood was perhaps fortunate to get away with a caution after a high challenge on Morgan Schneiderlin.

The Toffees were forced into a change shortly after the resumption as Richarlison was replaced by Theo Walcott, and they were grateful for Schneiderlin’s last-gasp intervention to deny Brady a certain scoring opportunity.

Burnley showed more purpose in the early stages of the second half than they did in the entirety of the opening 45 minutes.

Chris Wood’s low first-time strike was saved by Pickford while Brady’s teasing ball into the area caught Johann Berg Gudmundsson unawares, leading to the ball spooning over the bar.

Dwight McNeil and Matej Vydra were introduced and the latter could feel aggrieved not to be awarded a penalty after Michael Keane appeared to push over the Czech in the area with a quarter of an hour remaining.

A way back into the match was not forthcoming for Burnley as Everton claimed an eighth clean sheet in their last 10 top-flight fixtures.

And it was the hosts who finished strongly as Ademola Lookman grazed the top of the bar with a venomous effort while Walcott was denied by Heaton when put through.