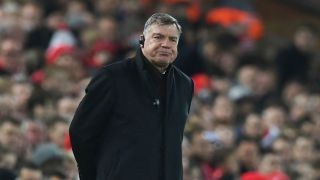 The Toffees fell behind in the first half at Anfield after Mason Holgate was deemed to have fouled Adam Lallana in the box and James Milner netted the resulting spot-kick.

It was a questionable call, but the visitors shrugged it off to fight back and equalise through Gylfi Sigurdsson, only for £75million Reds debutant Virgil van Dijk to win it for Jurgen Klopp's side.

"I think we gave everything we could and in the end we were disappointed that we did not take them back to our place," Allardyce told BBC Sport. "It is a shame after all that effort.

"I didn't think it was a penalty, but there is not much we can do now. For me, I thought some of the fouls they got and bookings we got and fouls we didn't get was very harsh by the referee in terms of consistency, there were similar incidents, similar penalties.

"At the end of the day we have given everything we could and we tried our very best."

In a match not short on talking points, tempers flared between Holgate and Roberto Firmino just before the break after the visiting defender pushed the Brazilian into the crowd.

The pair squared up after that and Holgate reacted angrily amid the altercation, but Allardyce refused to comment on the incident in any depth.

He said: "I'm only interested in the football, not want happened with Firmino and Mason. I will definitely ask him [what happened] and we will see where it goes from there."