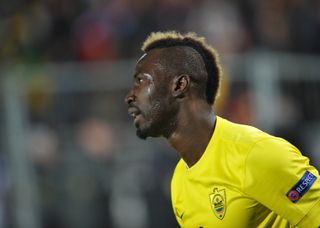 The Merseyside club have moved ahead of Premier League rivals West Ham in a bid to capture the giant Ivorian, who joined Monaco from Anzhi Makhachkala earlier this month and penned a four-and-half-year-deal.

Traore has yet to complete a temporary switch to Everton, but is now a step closer to joining Roberto Martinez's squad at Goodison Park.

A brief statement from Everton on Tuesday read: "Everton confirm it has been granted a work permit for Lacina Traore.

"Talks are ongoing with Monaco to secure the 23-year-old's services."

Martinez had previously confirmed his desire to sign Traore until the end of the season, with Monaco seemingly content to allow the forward to gain experience out on loan.