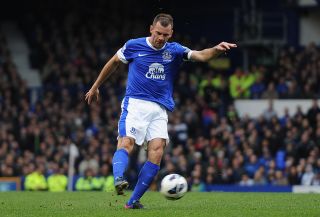 Gibson is yet to play this term after suffering a knee injury in their pre-season clash with Real Betis.

Kone, signed from Wigan Athletic in July, has made four appearances for the Goodison Park club so far, but missed the 1-0 win over Chelsea last time out because of a bruised heel.

However, Martinez - who has yet to taste defeat in competitive action since leaving Wigan in the close-season - has been handed a boost with the news that both are in contention to return ahead of their trip to West Ham on Saturday.

"Arouna (Kone) should have a very good opportunity to be involved on Saturday," said the Spaniard.

"He has still got a bit of bruising in his bone - he got a knock in training - but we hope over the next 48 hours he will be available to be with the side.

"We need Darron fit too. Darron is a special player and he brings something different to the side.

"He is progressing really well. I would say that from a medical point of view, he is very close to being fit. Now it's the match fitness he needs to get.

"That could take a bit of time and we need to adapt to how the knee reacts to work. But we are really happy to see him ready and really close to being able to be involved and be in the squad."

Antonlin Alcaraz's debut is further away after the Paraguayan underwent surgery on a groin problem, but Martinez hopes the defender will soon make his bow for the club.

"After the surgery Antolin had in his groin, now he is still recovering," he added.

"We need to make sure that we get him the right program and the medical department is working really well with Antolin."