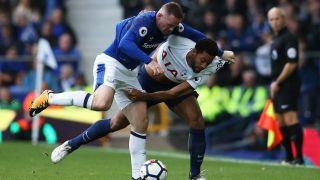 Everton manager Ronald Koeman slammed his side's second-half performance as "too weak" after they were brushed aside 3-0 by Tottenham at Goodison Park.

The Toffees trailed by two goals at the break and conceded a third shortly after the restart as they slipped to a second straight Premier League defeat and third without a win.

While pleased with Everton's start to the match, Koeman was left frustrated by his team's failure to fight their way back into the match after Harry Kane's "lucky" opener.

The Dutchman pointed to the gap in physicality between the two teams as a deciding factor.

"I do not ask for yellow or red cards, but in several situations we were too nice," Koeman said.

"I saw some Tottenham players [that were] really clever in the battles. We were too nice, too weak in the second-half.

"But I think that also has to do with confidence. The third goal straight after half-time killed the confidence in the team."

A very disappointed result today. Our start was not bad, but we lost control after the opening goal September 9, 2017

Everton have now faced each of last season's top three teams and their start to the campaign does not get any easier next weekend as they visit Manchester United.

Koeman believes his team are fighting inflated expectations after spending heavily in the transfer window.

"I know how it works in football. If you sign some players, [people tend to stop] being realistic," he said.

"Everybody is talking about Everton and the top six. But if you know the qualities, and the individual qualities of the players in the top six, it is a challenge.

"It is our ambition, but we need to realise it is difficult.

"We will learn from the mistakes today and we have enough games coming up to have a good reaction."