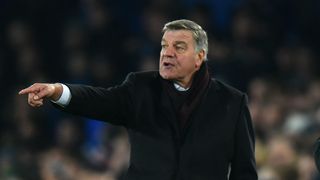 Former Barcelona forward Sandro has made just eight Premier League appearances this season since joining from Malaga, while Netherlands international Klaassen has featured only four times, and Allardyce admitted he is open to reduce the size of his squad.

Everton have sold Aaron Lennon to Burnley and Ross Barkley to Chelsea in January, but the Toffees boss said that most of the other incoming offers were for loan deals.

"We've had a number of enquiries that are not suitable for us to allow the player to leave, nearly all of them on loan," Allardyce said at a press conference ahead of Everton's clash with Leicester City on Wednesday.

"We haven't accepted any deal yet and we won't until the board tell me financially it's acceptable and I say to them it's in the best interests of the club or the player to go out on loan.

"We have got a lot of players so moving some out on loan would be a possibility but only if it's right for the club."

SA on potential outgoings: "We have had a number of inquiries that are not suitable for us to allow the players to leave."January 29, 2018

Allardyce was asked about the possibility of new players arriving at Goodison Park before the transfer window shuts on Wednesday, but said the clash with Leicester would hinder his chances.

Everton have been linked with Sevilla midfielder Steven N'Zonzi and Marcelo Brozovic of Inter, but when asked if there was any movement towards a deal for either player, Allardyce said: "Not yet."

"Clearly at the AGM they didn't think it was worth not doing it this time round, on the back of playing the whole of the Christmas period and playing five games in 15 or 16 days.

"I can pick a team today [Monday], and tomorrow I could pick up the paper and see a player is going to be sold before the window shuts. How is that player going to approach that game against Leicester that's very important to us? We all suffer that."