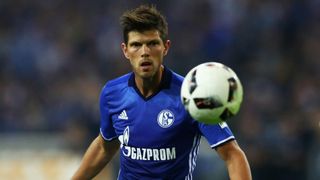 Schalke forward Klaas-Jan Huntelaar has fuelled speculation he could re-join Ajax, saying "everything is possible".

The 33-year-old left Ajax for Real Madrid in 2009, having struck over 100 goals for the Dutch giants, and he will go back to Amsterdam ArenA with Schalke in a Europa League quarter-final later this month.

Ahead of that clash, "big Ajax fan" Huntelaar has suggested a more permanent return could be on the cards, with his Schalke contract up at the end of the current campaign.

"Everything is possible," he said when asked about a possible move in an interview with Ajax's official website. "But it is difficult to say something about it now. We will see.

"Ajax were a childhood love of mine. I've always been a big Ajax fan. It is not very strange - my whole family supports Ajax."

Having been a key figure for Schalke in recent seasons, Huntelaar has started just five Bundesliga games this term, scoring only once.