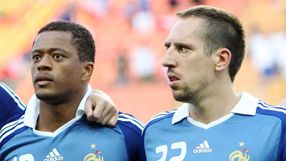 Blanc resisted the temptation to recall Evra for last month's friendly win over Brazil despite his suspension having expired but with fellow left-back Eric Abidal having surgery on a liver tumour, Evra has now got his chance.

Ribery was previously injured when his ban ended.

Before the squad list was issued, Sports Minister Chantal Jouanno reiterated her wish that the pair remain excluded.

"I maintain (my stance). Nothing has changed really. There was no apology, no mea culpa," she told reporters on a visit to the France national rugby centre at Marcoussis.

Blanc, who plans to have a special chat with Evra, hit back in a news conference.

"I make choices based on sporting criteria. I am only accountable to the president of the French Football Federation," he said.

"They had a certain status in the France team because of their experience. They need humility to return to the group with the same status as everyone else. (If not) I will be uncompromising and will not hesitate to take radical action."

Manchester United left back Evra is not expected to regain the captaincy with Ribery, in good form for Bayern Munich after overcoming a series of niggles, also unlikely to be a candidate.

"I have been very clear with him. State of mind will also be a criteria for selection. He must be irreproachable like the others," Blanc added of Ribery.

The squad contained no other surprises with Arsenal midfielder Samir Nasri back after missing the Brazil win with injury and team mate Laurent Koscielny retaining his place having received his first call-up last month.