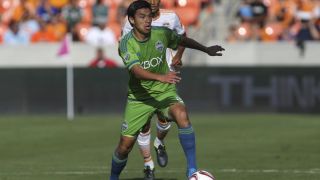 Former Seattle Sounders midfielder Gonzalo Pineda announced his retirement Thursday, ending a 13-year career that included 44 caps for Mexico and a trip to the 2006 World Cup.

Pineda, 33, signed with the Sounders in March 2014 following a preseason trial and went on to record four goals and nine assists in 56 appearances over two seasons, combining with Osvaldo Alonso to form one of the league's top central midfield duos in 2014.

But Pineda fell down the depth chart last season following the summer signing of Erik Friberg, and the Sounders declined his contract option at year's end.

The defensive midfielder began his career in 2002 with Pumas before playing for Chivas Guadalajara from 2006 to 2013, with loan stints also taking him to San Luis, Cruz Azul, Puebla and Queretaro.

Pineda represented Mexico from 2004 to 2008, making five appearances at the 2005 Confederations Cup and starting three matches at the 2006 World Cup.