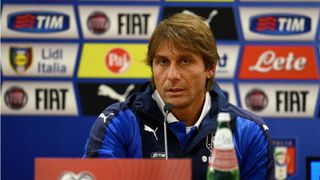 Italy coach Antonio Conte is eager to sample the "unique experience" Euro 2016 will offer as his side prepare to round off their qualification journey at home to Norway on Tuesday.

Conte's men sealed their place at the competition with a 3-1 victory over Azerbaijan at the weekend and can wrap up an unbeaten Group H campaign by avoiding defeat in Rome.

Former Juventus boss Conte featured at the European Championship with Italy in 2000, but is excited about the prospect of appearing as a coach in France next year, having been appointed after the World Cup last year.

"Going to the Euros will be a unique experience," he said.

"I've been jealous of colleagues who have gone [to the tournament] before, but this time the pleasure will be mine.

"Our goal will be to finish in the top four, but it will depend on how good we are and how things fall in place. We certainly won't start as favourites.

"I've always found it difficult to go into a competition with an idea of how far we should progress. Quality and luck usually decide."

Marco Verratti will not be risked against Norway at the Stadio Olimpico after picking up a knock, with Conte warning those outside the squad to earn a place ahead of the Euros.

"Verratti took a knock to his leg. If tomorrow's game was decisive I would risk him, but we will give him a rest. He's very devoted," he added.

"Any new players coming into the squad will obviously have to prove their worth if they want to play at Euro 2016.

"We'll try to use as many of the previous eleven in Rome, especially [Graziano] Pelle and Eder. I'm lucky to have players who believe in what we're doing. That makes me very confident.

"I think Norway and Croatia will both be at Euro 2016. We know that the game will be difficult, but we're going for a win."