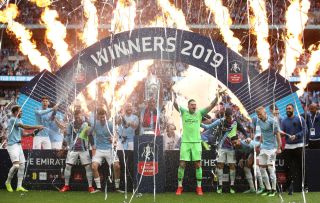 The Football Association is in discussions with the BBC and BT Sport about how to broadcast any FA Cup match which falls outside of the Saturday 3pm blackout period.

The FA has had to act after betting companies who had previously held exclusive UK streaming rights for ties not on television or kicking off at 3pm waived the right to exclusivity on Thursday.

The original deal was criticised for encouraging gambling, and how it jarred with an FA campaign promoting mental health awareness, but on Thursday the betting companies announced they were happy for a free platform to be found for these ties.

The FA is working with rights holders to find a solution, which may include screening games on an FA platform.

A statement from the governing body read: “The FA is in discussions with the BBC and BT Sport, our UK broadcast partners for the Emirates FA Cup, to ensure that every Emirates FA Cup match scheduled outside of the Saturday blocked broadcast hours is now made available to watch live on BBC, BT Sport, or on FA platforms.

“Further details will be confirmed in due course.”

The FA agreed a deal with sports media rights company IMG in January 2017 which mandated IMG to sell rights to live streams to betting companies both domestically and globally with the deals becoming effective from the start of the 2018-19 season.

The streams were then only accessible to customers of those companies who held active accounts. The arrangement was described as being “worse than grubby” by Conservative MP Damian Collins, who said that it created an “active incentive to gamble”.

The FA was understood to have little room for manoeuvre in withdrawing from the arrangements because of the third party element, but the decision of the betting companies to relinquish exclusivity presented a solution.

A statement from the Betting and Gaming Council’s chairman Brigid Simmonds on Thursday on behalf of the companies read: “Our members did not seek exclusivity for the rights to screen FA Cup games. They are therefore happy for IMG to offer the rights to screen these games to the Football Association or another appropriate body so that the games can be viewed for free by the public with immediate effect.”

▶️ My question this morning to @DCMS Minister @nadams on the @FA deal with @bet365pic.twitter.com/a0131T8xOA— Damian Collins (@DamianCollins) January 9, 2020

Finding a free platform became the responsibility of the FA, with IMG understood to only be mandated to sell betting streams.

The PA news agency understands that any free platform will need to be geo-blocked to prevent users from outside the UK accessing the streams, in order to protect overseas deals struck by IMG.

The FA’s ‘Heads Up’ mental health awareness campaign was promoted ahead of last weekend’s third-round ties, which given the link between problem gambling and mental health issues was especially embarrassing for the governing body.

Sports minister Nigel Adams, who joined the chorus of criticism and calls for the FA to reconsider the deal, welcomed the announcement from the betting companies on Thursday, writing on Twitter: “I welcome this statement by @BetGameCouncil following my remarks in the Commons this morning. It’s now over to @FA & IMG to ensure that fans can view these FA Cup games without needing to register for or to place a bet.”