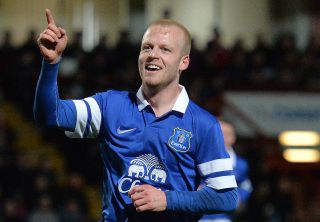 Naismith's goals came in the first half at the Lamex Stadium as the Premier League high-fliers coasted into the fifth round and gave the side languishing at the bottom of League One a lesson.

However, Costa Rica international Oviedo looks set for a lengthy spell on the sidelines after being carried off with a suspected broken leg following a challenge on Simon Heslop, which came between Naismith's two strikes.

Wantaway defender John Heitinga and Magaye Gueye added further goals for Everton in the second half to keep alive Roberto Martinez's hopes of lifting the cup for a second successive year, the Spaniard having masterminded Wigan Athletic's stunning Wembley win over Manchester City last May.

Aiden McGeady made his first Everton start as Martinez made five changes to his starting line-up following Monday's draw at West Brom. Stevenage winger Filipe Morais was passed fit after recovering from a dead leg.

Martinez claimed home advantage made Stevenage favourites and the second-tier side almost lived up to that billing by scoring the opening goal after only three minutes.

The home side caused panic in the Everton defence, but John Stones had to be alert to block Lucas Akins' goal-bound shot after Joel Robles had spilled the ball.

The visitors made the most of that reprieve two minutes later, when goalkeeper Chris Day palmed Kevin Mirallas' shot away to McGeady and his cross from the right was turned in by Naismith from close range.

Everton were then rocked as Oviedo fouled Heslop 17 minutes in and came off worse before leaving the field on a stretcher and heading to hospital.

The resulting free-kick routine was well worked by Stevenage and Robles got down well to his left to keep out Luke Freeman's left-footed strike.

Naismith was then presented with an opportunity to double Everton's lead after 32 minutes, after Jon Ashton failed to deal with Leon Osman's throughball, and the Scotland forward raced clear before tucking the ball under Day.

Mirallas was a real threat and Day denied the Belgium winger with a fingertip save eight minutes into the second half.

Everton did have a third goal just two minutes later, though, and Mirallas was the architect as his acrobatic overhead kick was headed in at the back post by half-time substitute Heitinga.

Senegalese strike Gueye then marked his first appearance of the season with a goal when he showed great composure to cut inside and finish with his left foot from inside the area six minutes from time.

Stevenage somehow failed to grab a late consolation when Darius Charles was denied by Robles and Everton cleared after an almighty scramble.