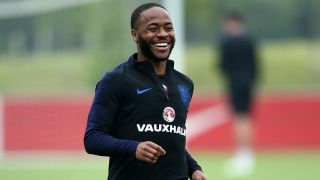 The Football Association has expressed its support for Raheem Sterling after he offered an "honest and heartfelt account" of his reasons for getting a tattoo of an assault rifle.

Sterling recently drew criticism from sections of the media and anti-violence campaigners for his choice to have the likeness of a weapon inked onto his right leg.

In an Instagram post published on Monday, the 23-year-old Manchester City and England player said the image was a tribute to his father, who was shot dead when Sterling was just two years old.

And the governing body appears satisfied with the forward's explanation.

"We all support Sterling and acknowledge the honest and heartfelt account he gave," an FA spokesperson said in a statement.

"He and the rest of the squad are focused solely on preparing for the forthcoming World Cup."

In his Instagram post, Sterling said: "When I was two my father died from being gunned down to death.

"I made a promise to myself I would never touch a gun in my lifetime.

"I shoot with my right foot so it has a deeper meaning."